Saskatchewan’s Perry Bellegarde has been named the new national chief of the Assembly of First Nations.

It only took one round of voting for Bellegarde to win, after getting more than 60 per cent of the 464 ballots cast during the event in Winnipeg. 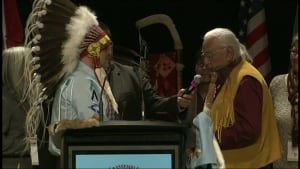 Perry Bellegarde, left, takes the oath of office as national chief of the Assembly of First Nations following an election Wednesday in Winnipeg. (CBC)

​​”It‘s done now, let’s roll up our sleeves and get some work done,” Bellegarde told the crowd.

And he had messages for both the chiefs who elected him and other Canadians.

“To the people across the great land, I say to you, that the values of fairness and tolerance which Canada exports to the world, is a lie when it comes to our people,” he continued.

“To Canada, we say, for far too long we have been dispossessed of our homelands and the wealth of our rightful inheritance.”

Bellegarde thanked his opponents and ended his speech saying, “Canada is Indian land.  This is my truth and this is the truth of our peoples.”

The AFN’s top job has been vacant since the abrupt resignation in May of Shawn Atleo amid controversy over his support of the federal government’s proposed overhaul of aboriginal education.

Bellegarde, chief of the Federation of Saskatchewan Indian Nations and former regional vice-chief for the AFN, ran against Atleo in the 2009 AFN leadership election.

That year, it was a 23-hour voting contest that ended on the eighth ballot, after six successive ballots in which Bellegarde and Atleo were virtually tied. 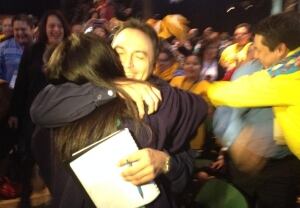 Bellegarde celebrates his win as national chief of the Assembly of First Nations on Wednesday in Winnipeg. (Jillian Taylor/CBC)

This time around, Bellegarde faced competition from Leon Jourdaine, chief of the Lac La Croix First Nation in northwestern Ontario, and ​Ghislain Picard, regional chief for Quebec and Labrador, who has been interim national chief since Atleo’s resignation.

Bellegarde will have an extra six months added to his three-year term as the organization restructures amid questions about its relevance.

Many have argued, during the lead-up to Wednesday’s vote, that the organization should wean itself off federal funding, while others have argued it doesn’t reflect the views and concerns of the grassroots. 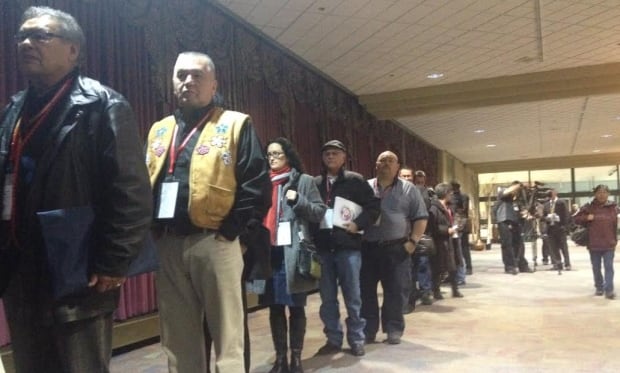 Delegates lined up to vote for AFN national chief as soon as polls opened at 9 a.m. CT on Wednesday. (Cameron MacIntosh/CBC)