Seattle Washington’s City Council made history and did the right thing in doing so, now join me in calling on the City Council of Kansas City Missouri to follow the example and replace Columbus Day with Indigenous Peoples Day!

Talking about calling into question the honesty of history; when it comes to Christopher Columbus, I have to start by saying “I love you Seattle!”

Why the United States celebrates this man as “discovering” America and just putting aside the paradox of “discovering” a land that already had a population I am supposing it still all comes down to ones definition of “America”.

Lets look at his accomplishments for just a minute.. On his 1492 voyage, Chris landed on a number of islands including some in the Bahamas very close to mainland Florida, but as far as I know, no U.S. landfall. On his second voyage, he landed at Hispaniola, Cuba, and Jamaica among others. All great islands; but no mainland U.S. On his third, he named Trinidad and landed in present-day Venezuela. Then, on his fourth, final voyage, he landed at present-day Panama. So, yes, in 1498 and 1502, he did reach the Americas, South and Central America to be exact, but by then he was hardly the first… Even if you discount the fact that people lived in these places all along.

So what exactly are we celebrating? Sure, Columbus was addicted to opium, but a lot of people were at the time. And, sure he was directly responsible for the enslavement, torture, mutilation and murder of thousands of indigenous people in the Caribbean islands during his quest for riches. And he could be credited for marking the establishment of institutionalized slavery in the West Indies, which, of course, led to a demand for more slaves and eventually hundreds of years of African slave trade… but… I suppose that was par for the course with explorers at the time, so I’ll leave labels up to you. (You may want to add this into the equation.) None of this rhymed with “Columbus sailed the ocean blue in 14 hundred and 92…” so of course it was all omitted. 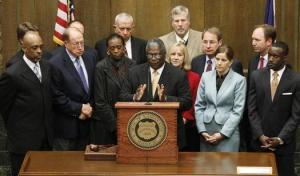 Kansas City, Mo. and Kansas City Kansas should follow Seattle in recognizing the confusion of the term “discovering” when it
comes to a country already populated by the original sons and daughters of this country and that is what we should be recognizing.